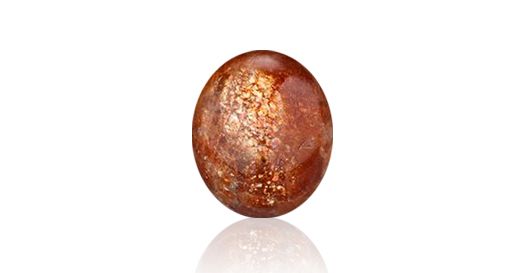 Gem connoisseurs and innovative jewelry designers often seek the subtle beauty of lesser-known—but still intriguing and unique—gemstones. Some of those are members of the feldspar group.

The feldspar group's wide variety of unusual gems includes moonstone, non-phenomenal orthoclase, phenomenal and non-phenomenal labradorite, sunstone, and amazonite. Although sunstone and moonstone are both members of the feldspar group, the resemblance stops there. While cool moonstone's phenomenal varieties offer a soft and gentle adularescent glow, warm sunstone's phenomenal varieties show a distinct and lively glitter called aventurescence. Aventurescence is a sparkly, metallic-looking luster caused by flat, reflective inclusions, sometimes called "schiller" by sunstone fanciers. Not all feldspars that bear the name "sunstone" are from the same side of the feldspar family—both the orthoclase and the plagioclase species boast a sunstone feldspar variety. The name sunstone refers to the gem's appearance rather than to its chemical makeup.

The US state of Oregon produces a number of sunstone varieties. The increasing supply from the area has made sunstone more available to the general public. Because many of the sunstone types are unique to the rugged high-desert area in South Central Oregon, they're being marketed as "all-American" gemstones.

In the early 1800s sunstone was a little-known, rare, and costly gemstone. It wasn't until finds in Norway, Siberia, and other parts of the world that sunstone became somewhat more widely recognized, more available, and less expensive. In the US state of Oregon in the early 1900s, there were reports of sunstone finds in ancient lava fields in a desert area called Warner Valley. Even earlier, Native Americans in that area might have been the first collectors of Warner Valley sunstones.

According to Native American legend, the blood of a great warrior – wounded by an arrow – dropped onto pieces of Oregon sunstone. The blood carried his warrior spirit into the stones, coloring them with shades of red and giving them sacred power. A museum in Jacksonville, Oregon, includes sunstones in its display of Indian artifacts. In Oregon today, several mining claims produce enough of this unique material to supply mass marketers as well as carvers and high-end jewelry designers.

Oregon sunstone is a transparent feldspar with copper inclusions. It comes colorless as well as in a wide variety of colors, including pale yellow, pink with brilliant aventurescence, orange, red, green, and blue-green. The red version is often marketed as "spinel red," and its vivid hue—if not its hardness—rivals spinel or even ruby.

Some Oregon sunstones are either bicolored or tricolored, and a rare few display color change. Currently, the top deep green, deep red, and intensely bicolored sunstones are considered extra fine.

Warm, soapy water is always a safe sunstone cleaning method. Ultrasonic and steam cleaners should be avoided. Feldspars are rapidly attacked by hydrochloric acid, so cleaning products containing bleach should also be avoided.

This information was excerpted from the GIA's Gem Encyclopedia with permission from the GIA.