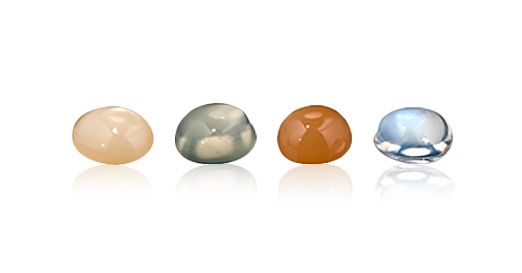 Moonstone’s delicate beauty and its long-established heritage make it perhaps the most familiar gem-quality member of the feldspar group. Moonstone is a variety of the feldspar-group mineral orthoclase. It’s composed of two feldspar minerals, orthoclase and albite. At first, the two minerals are intermingled. Then, as the newly formed mineral cools, the intergrown orthoclase and albite separate into stacked, alternating layers. When light falls between these thin, flat layers, it scatters in many directions, producing the phenomenon called adularescence. Adularescence is the light that appears to billow across a gemstone, giving its surface a glowing appearance. Perhaps the most captivating aspect of adularescence is its appearance of motion. The misty light seems to roll across the gem’s surface as you change the viewing angle. Other feldspar minerals can also show adularescence. One is a labradorite feldspar found mainly in Labrador, Canada. Another labradorite—found in Madagascar—has a multicolored adularescence over a light bodycolor. It’s known in the trade as rainbow moonstone, despite the fact that it’s actually a variety of labradorite rather than orthoclase.

According to Hindu mythology, moonstone is made of solidified moonbeams. Many other cultures also associate this gem with moonlight, and it’s easy to see why. Its internal structure scatters the light that strikes it, creating a phenomenon known as adularescence. The visual effect is reminiscent of the full moon shining through a veil of thin, high clouds. Great designers of the romantic Art Nouveau era, such as René Lalique and Louis Comfort Tiffany, featured the pale gem in custom jewelry. Moonstone was also a favorite among artisans of the Arts and Crafts era in the last half of the nineteenth century, who used it in handcrafted silver items.

Moonstones range in appearance from semitransparent to opaque and colorless to white, with a blue, silver, or white adularescent effect. Moonstone bodycolors vary widely. They can be green, yellow to brown, or gray to nearly black. Along with adularescence, some moonstones show chatoyancy, also called the cat’s-eye effect. A few show four-rayed stars in an effect called asterism.

Warm soapy water is the only recommended substance for cleaning moonstones. Ultrasonic and steam cleaners are never recommended.