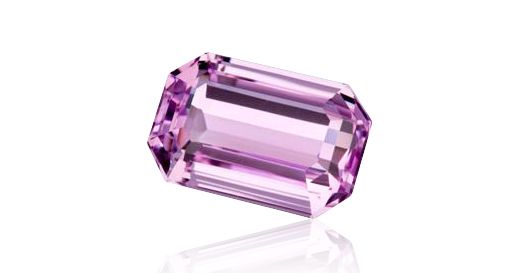 Kunzite is the best-known variety of the mineral spodumene. It's named after famed gemologist George Frederick Kunz, who was the first to identify it as a unique variety of spodumene. It's found in Afghanistan, Brazil, Madagascar, and the US state of California. Kunzite has two perfect cleavage directions. It's pleochroic, with the best color visible when you look down the length of the crystal. Cutters keep these factors in mind when they orient gemstones for finishing. They might also cut a kunzite deep to emphasize its pink to violet color. It is not unusual to find kunzite in large sizes. The Smithsonian Institution houses a faceted heart-shaped kunzite that weighs 880 carats.

Kunzite is a relative newcomer to the array of colored stones available for use in jewelry. As the story goes, specimens of an as-yet-unidentified pink crystal were found in San Diego County, California, and sent to Tiffany & Co.'s mineralogist, George Frederick Kunz. The year was 1902. Kunz was able to confirm that the crystals were, in fact, spodumene, but the previously unrecognized color made the find a new variety of the mineral. Charles Baskerville, a chemistry professor at the University of North Carolina and later the City College of New York, subsequently named kunzite in honor of George Kunz in 1903. In the years since, kunzite has proven to be a highly desirable gemstone. Occurring in attractive shades of pink to violet, kunzite crystals are also often large, with relatively few inclusions. Though difficult to cut due to its two cleavage directions, it lends itself to lovely finished gemstones that show magnificently in fine jewelry.

Kunzite is the pink-to-violet variety of the mineral spodumene, and gets its color from manganese. It's most often found in shades of pale pink, but more vivid colors are possible and it can achieve rare hues of vivid violet to purple.

This information was excerpted from the GIA’s Gem Encyclopedia with permission from the GIA.