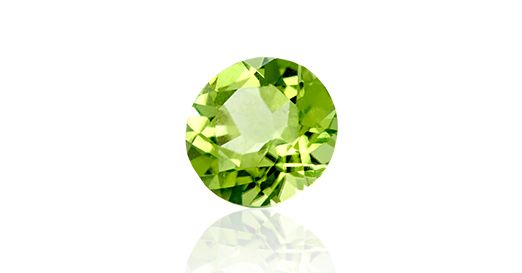 Peridot is the gem variety of the mineral olivine. Its chemical composition includes iron and magnesium, and iron is the cause of its attractive yellowish green colors. The gem often occurs in volcanic rocks called basalts, which are rich in these two elements. The word peridot comes from the Arabic “faridat,” which means “gem.” Most peridot formed deep inside the earth and was delivered to the surface by volcanoes. Some also came to earth in meteorites, but this extraterrestrial peridot is extremely rare, and not likely to be seen in a retail jewelry store. Gem miners find peridot as irregular nodules (rounded rocks with peridot crystals inside) in some lava flows in the United States, China, and Vietnam and, very rarely, as large crystals lining veins or pockets in certain types of solidified molten rock. Sources for the latter include Finland, Pakistan, Myanmar, and the island of Zabargad.

Early records indicate that the ancient Egyptians mined a beautiful green gem on an island in the Red Sea called Topazios, now known as St. John’s Island or Zabargad. Legend has it that the island was infested with snakes, making mining unpleasant until an enterprising pharaoh drove them into the sea. From the earliest times, people confused this stone—now known to be peridot—with other gems. It was one of many labeled as “topaz.” Some historians believe that Cleopatra’s famous emerald collection might actually have been peridot. People in medieval times continued to confuse peridot with emerald. For centuries, people believed the fabulous 200-ct. gems adorning the shrine of the Three Holy Kings in Germany’s Cologne Cathedral were emeralds. They are, in fact, peridots.

The color range for peridot is narrow, from a brown-green color to yellowish green to pure green. Yellowish green is the most common peridot color seen in jewelry.

Warm, soapy water is the best method for cleaning peridot. Ultrasonic and steam cleaners are not recommended.