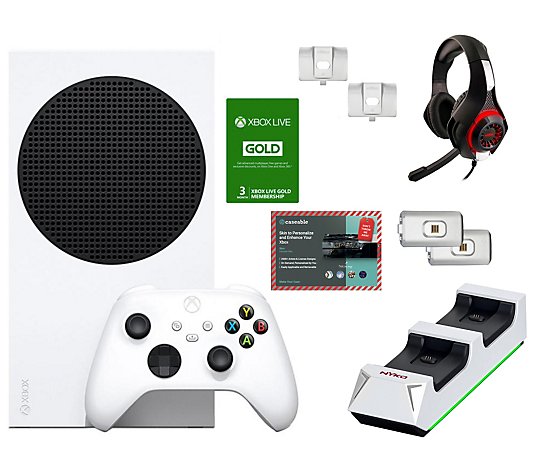 Plus, this bundle includes a variety of useful accessories, including a headset, dual charging dock, and two battery packs.

Xbox Series S 512GB w/ Xbox Live, Headset, and Accessories is rated 3.8 out of 5 by 13.
Rated 2 out of 5 by Veeto from Inflated Prices The system only cost $299 the extras don't add up. If you can't wait and must have one get it but you're overpaying for it
Rated 5 out of 5 by momd2 from Happy Happy Happy I bought this for my 15 year old Nephew as a surprise gift. I ordered on a Sunday and the Game System was at my door on Wednesday. This was one of the fastest deliveries I have ever gotten from QVC. My nephew is so so happy with the speed and graphics and the 3 months of FREE video game play. He says," It's All Good!"
Rated 4 out of 5 by leximmo from Not a bad gaming Not a bad gaming machine at all. Graphics are decent and game play is good as long as you have a strong WiFi connection. Doesn’t have a large memory so an external hard drive is needed for storage.
Rated 5 out of 5 by brebre1977 from We own the teal We own the teal xbox s1 and we love it we use it to play games as well as to watch tv and use apps that we have installed. I love the xbox series and have always had an xbox of some kind in my home since my oldest children were young. We can also use it as a blue ray player I have owned play station and Wii as well but always go back to my xbox box .
Rated 5 out of 5 by yourmother from So far so good! So far so good! It’s fast and super reliable. The graphics are clutch but keep in mind to fully maximize your graphics you need to have a 4K TV. It has no CD drive which is great for just a gaming console. If you’re using this as a streaming device or to play DVDs I’d recommend upgrading to the X.  Worth the upgrade!  
Rated 1 out of 5 by Raina9944 from Poor I ordered this Xbox bundle for my boyfriend for his birthday the only thing that came in the box was the Xbox no controller no cords.
Rated 5 out of 5 by SexyRed38 from My Xbox First of all I love the bundle. Secondly I love the graphics.
Rated 5 out of 5 by Susumurin from Very Satisfied Customer I just finished ordering my skin from Caseable to essentially complete my bundle. This is a really great starter kit. 3 months of Xbox Live scores you some free games to start playing right away and you get to keep some of them permanently. The charge kit is a really nice accessory and works quickly. The headset is a good starter for casual play. Sure there’s a bit of markup, but the overall value is pretty good and the fact that you can have the system for up to 4 months before you finish paying for it makes up for that. I highly recommend this bundle.