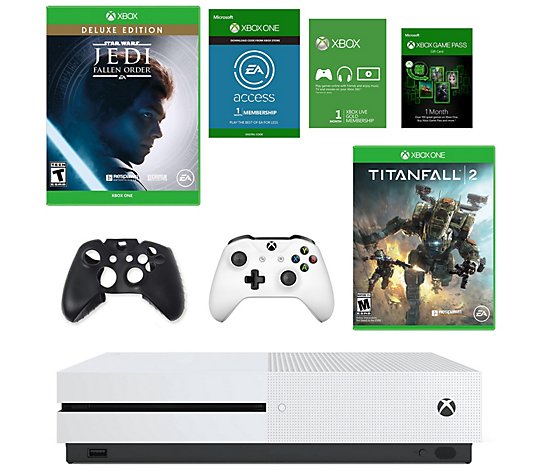 Be prepared for battle with this Xbox One S bundle featuring Star Wars Jedi: Fallen Order plus Titanfall 2 and other useful accessories.

Begin your own galactic journey in Star Wars Jedi: Fallen Order. Set a few years after Revenge of the Sith, may the Force be with you as you join Padawan Cal Kestis as he travels the galaxy in an attempt to rebuild the Jedi Order -- all while avoiding capture by Imperial forces. Rated T. From EA.

Prepare for Titanfall... again. Step into a mechanical exoskeleton in Titanfall 2 and rediscover the series' intense mech-based multiplayer. Plus, this sequel brings a single-player campaign, so you can get in on the action even when your friends aren't around. Rated M. From EA.

Xbox One S Bundle with Star Wars, Titanfall 2,& Silicone Case is rated 5.0 out of 5 by 1.
Rated 5 out of 5 by GGC28 from Nice bundle. Great gift I got this for my son for Christmas/his birthday and he was excited with all the extras that came with it. Came with a one month game pass with xbox live included. :) The console and controller theirselves are really nice.