Xbox One S 1TB with Call of Duty, Voucher and Headset 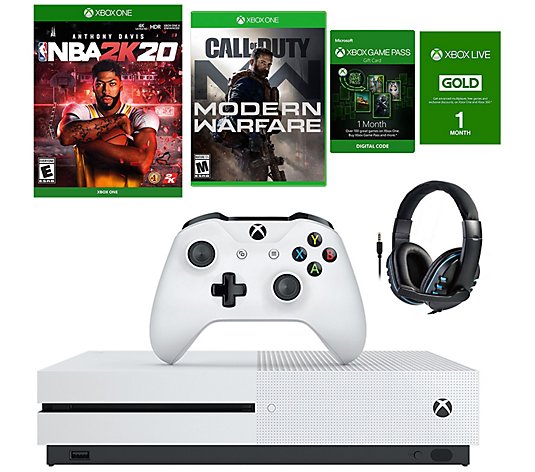 Whether you're a first-person shooter or an absolute baller, this Xbox One S bundle is for you!

The stakes have never been higher as players take on the role of lethal Tier One operators in a heart-racing saga that will affect the global balance of power. Call of Duty: Modern Warfare engulfs fans in an incredibly raw, gritty, provocative narrative that brings unrivaled intensity and shines a light on the changing nature of modern war. Developed by the studio that started it all, Infinity Ward delivers an epic reimagining of the iconic Modern Warfare series from the ground up. Rated M. From Activision..

Xbox One S 1TB with Call of Duty, Voucher and Headset is rated 1.7 out of 5 by 3.
Rated 3 out of 5 by SPARKLING CLEAN from Over priced Sorry to say this was so over priced. As much as we pay you don't even get free shipping. The headset didn't even work,very cheap headset. The micro soft live is only one month 10.65 free. As much as we pay it should be 3 months. Everything you get with it isn't worth paying so much. Get it somewhere else. I do not recommend at all.
Rated 1 out of 5 by Kw33n from Where is my item or my refund? I purchased this and did not receive the item. I contacted the shipping company who advised me to contact QVC. I contacted QVC last month and was told that I’d get a refund in 2-3 days and I haven’t heard from them. I bought this on easy pay so I will need to dispute this through my bank to stop any future transactions! I needed this for my nephews birthday gift to brighten his day amidst the pandemic but that plan failed and the item is currently on waitlist so they couldn’t send me another one.
Rated 1 out of 5 by sherir from item did not turn on This item came yesterday and did not turn on at all. We are extremely disappointed and have received no responses from QVC.