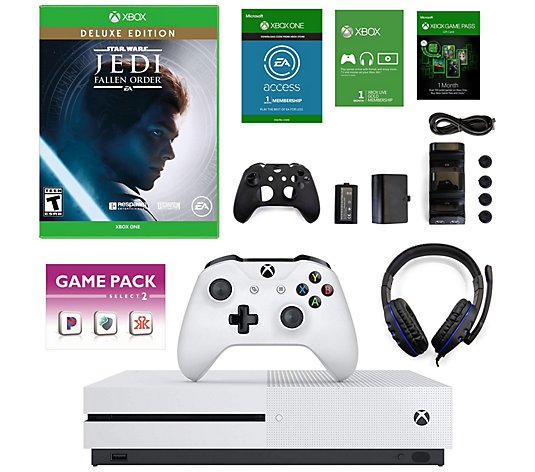 Begin your own galactic journey in Star Wars Jedi: Fallen Order. Set a few years after Revenge of the Sith, may the Force be with you as you join Padawan Cal Kestis as he travels the galaxy in an attempt to rebuild the Jedi Order -- all while avoiding capture by Imperial forces. Rated T. From EA.

Xbox One S 1TB w/ Star Wars Jedi:Fallen Order is rated 2.0 out of 5 by 1.
Rated 2 out of 5 by CJGilley from Xbox works but other parts failed Loved the game it came with. This was a gift for my husband so that was a big deciding factor. The Xbox One S works just fine and the game was great. The controller, however, constantly had issues from the beginning. You would lose connection and need to pop the batteries in and out to get it working again. Headset that came with it did not work. If you're not concerned about using the accessories then it's a good buy. Make sure you have your own controller.