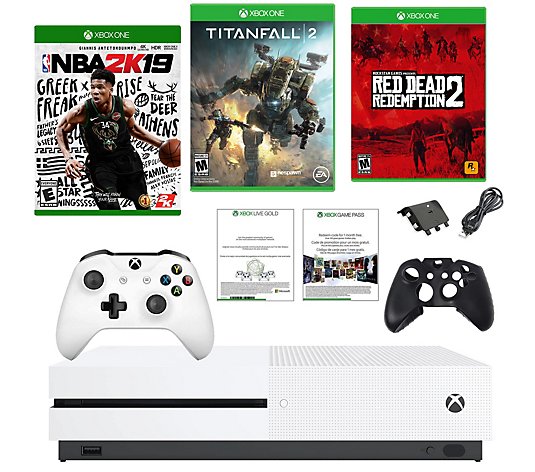 Red Dead Redemption 2 is an epic tale of life in America at the dawn of the modern age. With federal agents and the best bounty hunters in the nation massing on their heels, Arthur Morgan and the Van der Linde gang must rob, steal and fight their way across the rugged heartland of America in order to survive. Rated M. From Rockstar Games.

Prepare for Titanfall... again. Step into a mechanical exoskeleton in Titanfall 2 and rediscover the series' intense mech-based multiplayer. Plus, this sequel brings a single-player campaign, so you can get in on the action even when your friends aren't around. Rated M. From EA.

Dominate on and off the court playing NBA 2K19. With unparalleled authenticity and exciting improvements, the game lets you score an unrivaled experience that blurs the lines between video game and reality. Rated E10+. From 2K Sports.

Xbox One S 1TB w/ Red Dead Redemption 2, NBA 2K19, Titanfall is rated 4.7 out of 5 by 3.
Rated 5 out of 5 by Teeto_g from Great Gift idea Got it for my bf and he loved it. Only problem now is that he's always on it. This was a really good deal. Saw the same one at Walmart for $500 but only with 2K19. Now it's even cheaper. I just ordered it last week can I get a price match lol
Rated 4 out of 5 by Mattw from Not a bad bundle I also got it for 350 and for that its unbeatable. My only complaint is the rechargeable battery pack is kinda garbage constantly pops out cause nothing holds the top in. When u put it on it only clicks in the bottom. Its off brand junk get the real xbox battery.
Rated 5 out of 5 by George Hillard from Great Value I purchased this bundle when it was on sale for $349.99 with 5 payments instead of the 4, so my payments were a bit lower. The Xbox One S is a lot slimmer than the traditional Xbox One. The bundle came with RDR2 (hard copy), Titanfall (hard copy) and a digital copy of NBA 2K19. Bundle also came with a rechargeable battery pack and controller charger that I actually didn't notice until it arrived. A pleasant surprise for anyone who hates buying and replacing batteries every other week. I'm not sure if this is the case for every console or just this one, but the fan on top of the One S is fairly obnoxious. It's not super loud, but loud enough to be noticed when your TV isn't above a certain noise level. Thus far that would be my only complaint. Overall, would highly recommend for anyone looking for a system with payment plans.