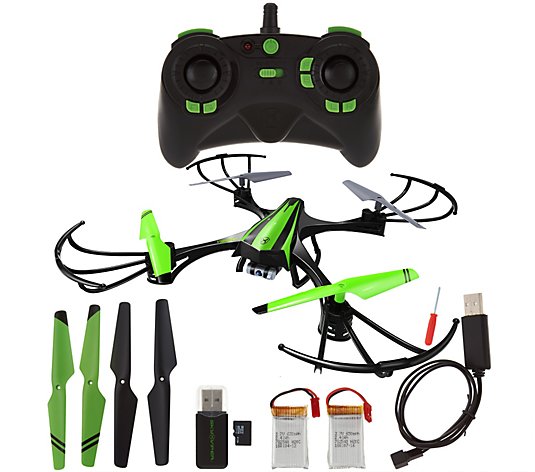 You can't beat the view. Capture amazing photos and 360-degree panorama video footage with the Sky Viper HD v950HD drone copter. The built-in SkyPro camera records 720p HD video, which you can store on the included 4GB microSD memory card for playback. One-touch panoramic video puts the drone into a controlled-spin flight pattern to capture incredible 360-degree views from up to 200 feet away. And with the Stunt button, all it takes is one touch to have the drone perform barrel rolls and stunts in mid-flight! From Skyrocket Toys.

Rated 3.4 out of 5 by 14 reviewers.
Rated 1 out of 5 by tadpole1957 Junk Went up two times then broke. Gave as a x-mas gift. Can not return now!!!! 01-02-17
Rated 5 out of 5 by Texastera PERFECT ! Great purchase! Once it was set up it's very easy to fly - just takes a little practice but we are loving it ! 11-30-16
Rated 2 out of 5 by Kari60 Did not hold up I bought it for my Husband and he flew it once it landed hard and now won't work. One of the propellers won't spin and when I push it it starts but won't take off. Goes sideways. I got one video that was cool but that was it. 11-17-16
Rated 1 out of 5 by Don 1 Drone failed Would not recommend Sky Viper products. Two failures during the 1st flight. Lucky that I purchased them fro QVC. They have a great return policy. Feel confident buying from QVC. Will be back for more products. 10-23-16
Rated 5 out of 5 by Jmac64 Great Drone Very easy to learn. Very durable. Bought this as a drone to learn to fly before buying more expensive one. 10-16-16
Rated 1 out of 5 by GMoM Not of good quality This was a birthday gift for my husband that he barely got off the ground for a total of 10 flying minutes. It seemed to have a short somewhere. Sometimes it would come on other times wouldn't come on at all. And when it did fly it was only forward. Would not go backward. I was so disappointed because this is maybe only the second time I've had to make a return. And my husband is out a birthday gift. 10-15-16
Rated 5 out of 5 by ammiewhammy Awesome!!!! Very awesome for my 12yr son!! This is his first drone, it was very easy for him to get it all set up to play with! He picked up on how to fly it very fast, it has been crashed 100 of times since he received it on October 1st. Still works perfect after all the crashes and after our dog snatched it out of the air! It takes pretty awesome pictures also! I wish I could get some of the pictures he has taken with it on here? He really enjoys this drone!! I now have to buy a 2nd for my husband :) 10-11-16
Rated 1 out of 5 by KelT Came broken in box We received this drone today and the controller was broken. The left control would not work at all. We are returning it. 10-06-16
MORE REVIEWS>> 2