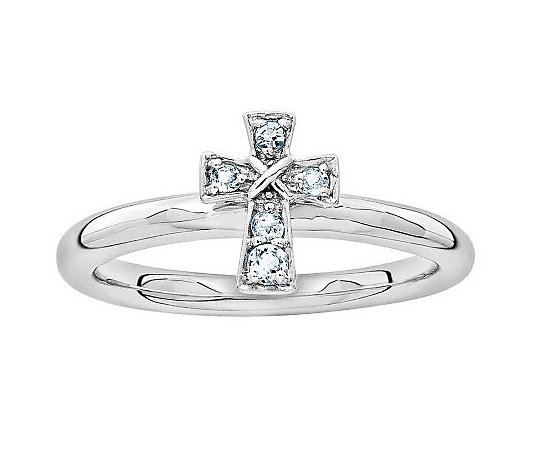 Shining spirit. With gorgeous birthstone accents, this delicate cross ring makes a lovely birthday present or a gift just for you. It's also a beautiful expression of faith. From Simply Stacks(TM) Jewelry.

Simply Stacks Sterling Birthstone Cross Ring is rated 3.3 out of 5 by 11.
Rated 3 out of 5 by Karen1974 from Cute for a little girl, not a teenager This is very cute but not for a teenager like I was hoping.
Rated 1 out of 5 by bootheelgirl from aquarmarine was clear All the stones in this were clear, not a hint of blue.
Rated 5 out of 5 by MichiganGal08 from Petite, Just What Was Looking For This ring is a beautiful petite way to have a symbol of my faith on my hand. I got it in my birthstone to wear on my middle finger. It has enough presence to hold it's own there but isn't overly flashy. Also seems to be holding up to normal everyday wear and tear so far, was worried the design would snag/catch a lot but so far it's held up well.
Rated 5 out of 5 by SOOZN from Love this sweet ring I bought this with the March birthstone, light blue stone, just to have a touch of color. I wear it on my middle finger. It is small, but also very sweet. Makes a statement and is a reminder to me all day looking at it. I think I will purchase others as gifts.
Rated 1 out of 5 by Daffodil51 from Disappointed I was disappointed at the size of the Cross, it was so tiny. The stones were so small and light, almost clear in color for an acquamarine stone. I returned it. Because of my faith, I wanted this symbol of the Cross to be seen. Never got any compliments as I usually do with the rings I get from QVC.
Rated 1 out of 5 by Royal Oak from Surprised that QVC would sell this... I ordered 7 stacking rings in total, peridot themed. The color of the cross & flower were very light-and cloudy. The band ring from the August month set was cloudy/almost non-existent in size. All are going back. Value and Quality not there.
Rated 5 out of 5 by mabugg60 from Great Value Needed a small gift for my new daughter-in-law for her birthday. Not the main gift, but just a small token to keep. Aquarmarine is her birthstone and this ring was beautiful and simple - just her style. She loved it and therefore may me a happy customer and happy mother-in-law.
Rated 2 out of 5 by Puggirlz from So sad! After wearing it every day for a month, I noticed the bottom portion was bent and then a stone fell out. So sad, because I loved it:( Returned as defective.