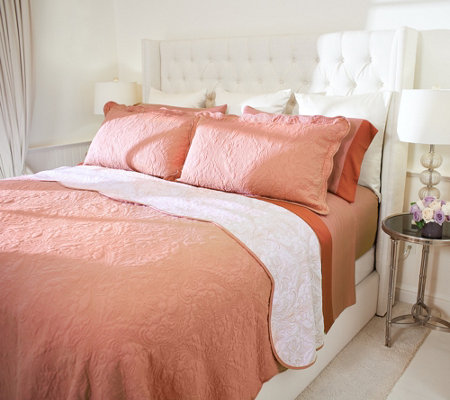 Weaving her passion for design with vintage inspiration, Catherine Zeta-Jones is delighted to bring you this coverlet set that coats your bed in soft cotton. Displaying quality workmanship, the gracefully stitched pattern is reminiscent of yesteryear with a classic sensibility, yet durable for modern wear. The curved sweep of the scalloped edge suggests this reversible coverlet is more than just a covering, but a very special keepsake to be treasured season after season. From Casa Zeta-JonesTM by Catherine Zeta-Jones.

Casa Zeta-Jones Reversible King Cotton Coverlet Set w/ Scalloped Edge is rated 4.5 out of 5 by 94.
Rated 5 out of 5 by kad from Perfect!! Absolutely a beautiful coverlet!! It is perfect in every way possible. Love that it is all cotton. I purchased it in grey. I have a Queen size bed but I prefer the King size for the additional coverage on the sides. Catherine's products are high end at a reasonable price. I found no faults in purchasing this "AS IS" product. Highly recommend!!
Rated 4 out of 5 by Julie from Arizona from BOUGHT THIS "AS IS" LOOKS NEW This is a beautiful design. I bought the king size. The color is nice, the ashes of roses is a deep lilac. The pillows fit king size pillows. The zipper makes me nervous as far as it holding up/not getting stuck in the future. It opens large to easily place the pillow inside. The coverlet is NOT LONG ENOUGH. If you buy this king size for a queen size bed, you would be pleased. But, this is not big enough for a king, unless you don't mind it not going very far down on the sides. Not happy about that myself. I plan on keeping it though as I got it at a good price on the AS IS, and it looks nice.
Rated 5 out of 5 by Kathy888 from GREAT VALUE and CLASSY This cover looks outstanding on my bed...bought the K to make bedspread for Queen...beautiful, elegant and subtle. Sleeps well as it is 100% cotton, inside and out. I tend to sleep hot. not so with these. Beautifully Crafted!!!
Rated 3 out of 5 by Princess Kim from Not big enough for my King size bed. I have a king size bed, and the bedding is just too small. It’s very beautiful, but it just doesn’t hang long enough on the sides. Having to return it.
Rated 4 out of 5 by Bistreaux from What more could you wish for? Love it! Pretty stitching and scallops, bargain price, reversible, cotton, not too heavy for warmer nights or so heavy that my husband will fuss. Love color choices, too. Liked the size—more than a coverlet not as much as a bedspread. Washed King as instructed and did NOT overload the washer. Sign me first time reviewer and satisfied customer. Would give 5 stars if quality remains over time. So far, so good!
Rated 5 out of 5 by Anonymous from Great coverlet! This is a great coverlet! It washes and dries beautifully and looks great on our bed.
Rated 3 out of 5 by bigred44 from Color Dull I bought the blue and the color is not as bright as seen on the computer or tv. I am glad I bought the king size for a queen bed and it fits fine.
Rated 5 out of 5 by candygirl533 from Best Purchase Ever Bought this coverlet last year. It is very nice and worth every penny! You will not be disappointed . I washed on cold water in my ex large washer and dried on low for 36 minutes in my dryer. It came out perfect.I did not notice any shrinkage.