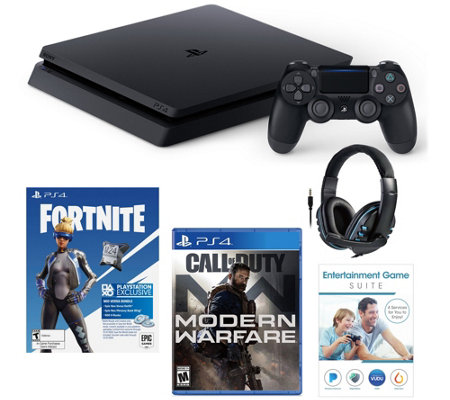 Be prepared for battle with this PS4 Slim bundle, complete with Fortnite and Call of Duty: Modern Warfare games.

With gaming consoles, thin is in. And with the PS4 Slim, you get the full PS4 experience in a sleek package. Full HD 1080p graphics capabilities enhance every experience, whether you're on a battlefield, exploring fantasy lands, or soaring to a galaxy far, far away. But there's so much more to the PS4, now with a more streamlined look and faster Wi-Fi connectivity, than just gaming--you'll also have instant access to apps like Netflix. And get ready to show off, because the updated DualShock 4 controller's Share button lets you instantly upload your most impressive gaming moments or livestream gameplay sessions. From Sony.

An epic reimagining of the iconic series, Call of Duty: Modern Warfare engulfs fans in an incredibly intense and gritty narrative complete with contemporary military missions and maneuvers. Rated M. From Activision.

In Fortnite, you'll battle to be the last one standing. Explore a large, destructible world where no two games are ever the same. Build huge forts, find loot, and squad up with friends to earn your Victory Royale. The Neo Versa bundle also comes with the Epic Neo Versa outfit, Epic Neo Phrenzy Back Bling, and 500 V-bucks vouchers. Rated T. From Epic Games.