PS4 Slim 1TB Bundle with The Last of Us, God ofWar, & Horizon 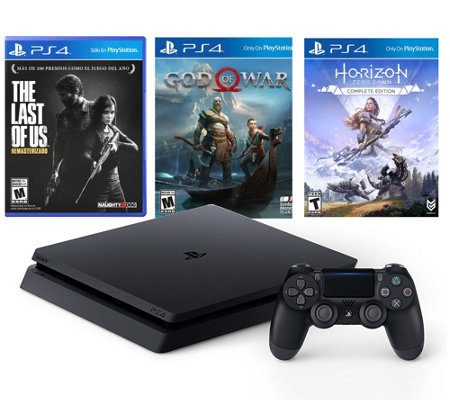 With gaming consoles, thin is in. And with the PS4 Slim, you get the full PS4 experience in a sleek package. Full HD 1080p graphics capabilities enhance every experience, whether you're on a battlefield, exploring fantasy lands, or soaring to a galaxy far, far away. But there's so much more to the PS4, now with a more streamlined look and faster Wi-Fi connectivity, than just gaming--you'll also have instant access to apps like Netflix. And get ready to show off, because the updated DualShock 4 controller's Share button lets you instantly upload your most impressive gaming moments or livestream gameplay sessions. From Sony.

Build a bond through love, loyalty, redemption, and survival. In The Last of Us Remastered, guide Joel and 14-year-old Ellie across a post-pandemic United States from one Quarantine Zone to another as they encounter different factions of survivors with unique ways of dealing with infected humans, a lack of supplies, and the worst of humanity. Rated M. From Sony.

The revered God of War series finally makes its next-gen debut with a brand new story. Rebuilt from the ground up, fearless warrior Kratos returns with his son Atreus at his side, along with a new weapon--the magical Leviathan axe. Now living in the world of the Norse gods, he must teach his son to survive in this savage land filled with ferocious monsters and warriors. Rated M. From Sony.

An action-packed role-playing game, Horizon: Zero Dawn follows Aloy, a hunter in a world overrun by machines, who sets out to uncover her past. Rated T. From Sony.
Video Game Glossary
Print this Page