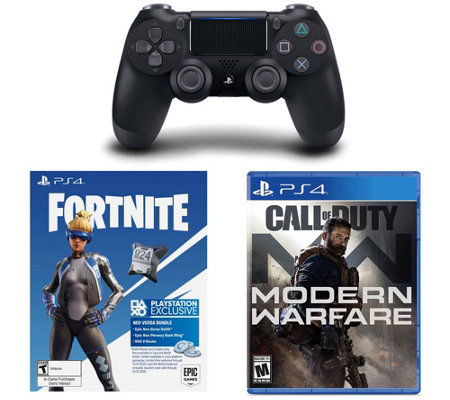 Elevate your PlayStation 4 experience with this bundle, featuring a DualShock 4 controller and two exhilarating games for your collection.

In Fortnite, you'll battle to be the last one standing. Explore a large, destructible world where no two games are ever the same. Build huge forts, find loot, and squad up with friends to earn your Victory Royale. The Neo Versa bundle also comes with the Epic Neo Versa outfit, Epic Neo Phrenzy Back Bling, and 500 V-bucks vouchers. Rated T. From Epic Games.

The stakes have never been higher as players take on the role of lethal Tier One operators in a heart-racing saga that will affect the global balance of power. Call of Duty: Modern Warfare engulfs fans in an incredibly raw, gritty, provocative narrative that brings unrivaled intensity and shines a light on the changing nature of modern war. Developed by the studio that started it all, Infinity Ward delivers an epic reimagining of the iconic Modern Warfare series from the ground up. Rated M. From Activision.
Print this Page