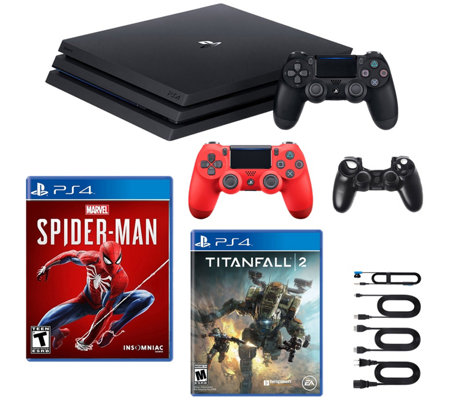 Time for a promotion. With 4K Ultra HD graphics and HDR support, the PlayStation 4 Pro will transport you to other worlds and immerse you in experiences that are remarkably lifelike. This upgraded model plays every PS4 game--so you don't need to restart your library--as well as enhanced editions of hot titles made to look better than ever. Naturally, you'll still have access to a variety of apps, and nothing's stopping you from streaming and sharing with the touch of the DualShock 4's Share button.

Starring the world's most iconic super hero, Spider-Man PS4 features the acrobatic abilities, improvisation, and web-slinging action that the wall-crawler is famous for, while also introducing elements never before seen in a Spider-Man game. Rated T. From Sony.

Prepare for Titanfall...again. Step into a mechanical exoskeleton in Titanfall 2 and rediscover the series' intense mech-based multiplayer. Plus, this sequel brings a single-player campaign, so you can get in on the action even when your friends aren't around. Rated M. From EA.