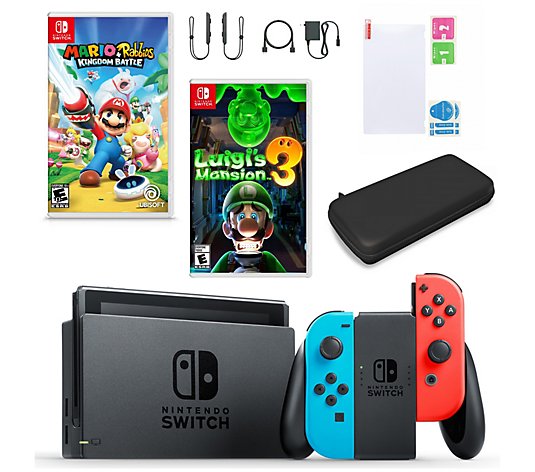 It's a console. It's a handheld. It's the incredibly versatile Nintendo Switch! A gaming system like no other, the Switch is capable of 1080p video output to your HDTV when docked. Get comfortable on the couch and enjoy an epic adventure using the Joy-Con controllers in a variety of ways. But guess what! The Switch also works as a standalone handheld with its own 6.2" diagonal touchscreen display. Thin and sleek, take it with you and stay entertained wherever you are. It's easy to switch between modes -- all it takes is a click to go from docked to handheld and back again. You can even link it with up to seven other Switch systems for multiplayer fun. From Nintendo.

Two worlds collide in Mario + Rabbids Kingdom Battle! The Mushroom Kingdom has been torn apart by a mysterious vortex, transporting the chaotic Rabbids into this once-peaceful land. To restore order, Mario, Luigi, Princess Peach, and Yoshi must team up with a whole new crew: four Rabbid heroes! Together, they will battle with weapons through four worlds filled with combat, puzzle, and unpredictable enemies. Rated E. From Ubisoft.

When Luigi is invited to the spooky Last Resort hotel, he discovers Mario and his other friends are missing! Help Luigi fight his fears to save the day in Luigi's Mansion 3. Rated E. From Nintendo.

Nintendo Switch with Luigi's Mansion 3 & Mario+ Rabbids is rated 5.0 out of 5 by 1.
Rated 5 out of 5 by Letabknown from Best gift for myself Luigi mansion is such a fun game and the console is awesome for all ages.