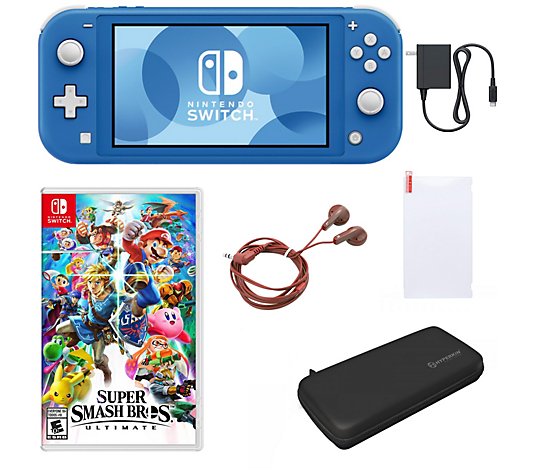 When your primary gaming is done, go with a portable system that has the power of a console. The Nintendo Switch Lite brings you all the same titles available for the Nintendo Switch, but in a design that's dedicated to handheld gaming. Its compact frame features a smaller 5.5" display but with the same touchscreen capability. Load up your favorite titles and wirelessly connect up to eight other consoles to challenge your friends.

Still want to try the wireless Joy-Con controllers? The Switch Lite has built-on controls, but can still link to the left and right Joy-Cons (not included) for a more immersive experience. From Nintendo.

An iconic clash between gaming icons, Super Smash Bros. Ultimate introduces new fighters like Isabelle, Simon Belmont, and King K. Rool to join Mario, Pikachu, Link, and every other character in series history. Fight faster and smarter with new and returning attacks and defensive maneuvers, squaring off in one-on-one combat with a friend, facing a four-player free-for-all, or kicking it up to eight-player battles. From Nintendo.

Nintendo Switch Lite with Super Smash Bros & Accessories is rated 3.7 out of 5 by 6.
Rated 2 out of 5 by Anonymous from Order missing item There was no game in box. Called customer service to report it.
Rated 5 out of 5 by jt7784 from Absolutely Amazing This is incredible a must buy for any lover of Nintendo
Rated 1 out of 5 by Thatagirl from Never ever QVC again As a long time customer, I felt good about ordering these for my grandsons. One arrived, the other did not. They are very close in age and since both items arrived at the processing center at the same time, it was expected that the items would do the same. Well not so. Please explain to a five year old who waited all day that “ it’s not our fault, we don’t control ups... your associate was sassy , caustic. And No help. Never again from QVC. Will use a vendor with a tad bit better communication skills .
Rated 5 out of 5 by Jennifer Sacks from Excellent purchase Great handheld gaming Ear buds are not any good Case is great Great screen protector Clear picture quality Fast great for gamers
Rated 4 out of 5 by Anonymous from No earbuds The earbuds in the picture did not come in the box! The rest of the items did and are fine, but my daughter was disappointed she didn't get the earbuds accessory.
Rated 5 out of 5 by Kayy24 from Best Purchase Ever Ordered this game for my 4YR old and he loves it!.