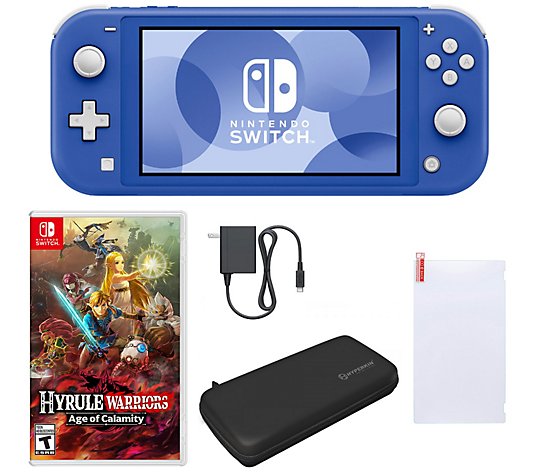 The system for gamers on the go.

The Nintendo Switch Lite is designed specifically for handheld play -- so you can jump into your favorite games wherever you happen to be.

When you're ready to hit the road (or claim the couch), go with a portable system that has the power of a console. The Nintendo Switch Lite brings you all the same titles available for the Nintendo Switch, but in a design that's dedicated to handheld gaming. Its compact frame features a smaller 5.5" display but with the same touchscreen capability. Load up your favorite titles and wirelessly connect up to eight other consoles to challenge your friends.

Still want to try the wireless Joy-Con controllers? The Switch Lite has built-in controls, but can still link to the left and right Joy-Cons (not included) for a more immersive experience. From Nintendo.

Join the struggle that brought Hyrule to its knees. Playable heroes like Link, Zelda, and more must use their distinct
abilities to carve through hundreds of enemies and save the King of Hyrule from impending Calamity. Rated T13+. From Nintendo.

Nintendo Switch Lite Bundle with Hyrule Warriors Game is rated 5.0 out of 5 by 1.
Rated 5 out of 5 by Angie1B from Good buy I ordered this game system for my daughter. She love it. Thanks QVC