Microsoft Xbox One S 1TB with Marvel's Avengers and Accessories 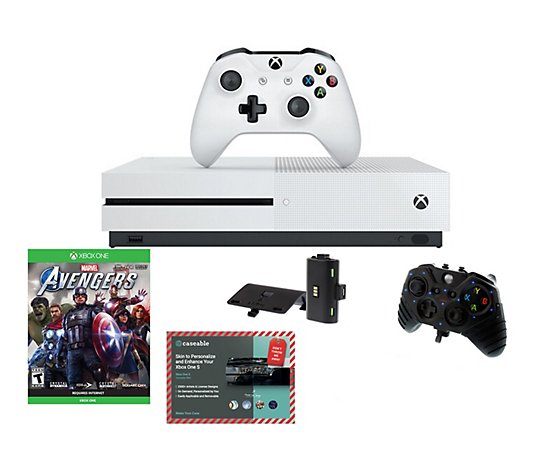 With all Super Heroes outlawed and the world in peril, Kamala Khan uncovers a shocking conspiracy and the only hope is to reassemble the Avengers in time to stop it. This epic action-adventure game combines an original, cinematic story with single-player and co-operative gameplay to defend the Earth from escalating threats. Rated T. From Square Enix.

Microsoft Xbox One S 1TB with Marvel's Avengers and Accessories is rated 1.3 out of 5 by 16.
Rated 2 out of 5 by Angieml from Shipping issue We purchase this Xbox to bring with us on a trip. It’s arriving 3 days late.
Rated 1 out of 5 by Cyebra from Finally!! After a long battle to get my Xbox 1s back in 12/26/2020. It has finally came in!!!!! Never again do I want to experience this delay with Microsoft again.
Rated 1 out of 5 by Bbrady from DO NOT ORDER THIS ITEM!!!! Ordered mine a while ago, still not here! So what do we do now, do we keep getting charged every month for the whole sha-bang?????? Will they ever refund the money if we NEVER receive it???????
Rated 4 out of 5 by Jjoy19 from SAME ISSUE AS OTHERS WITH SHIPPING This item does in fact never ship out. I have always gotten my orders quickly including a hottub and eliptical. They said they would claim the first xbox shipped as stolen and ordered another xbox but require signature for second one, but than the second one hasnt even arrived. They need to stop selling the avengers pack if they can not fufill order because waiting a month for an item thats great for our next lockdown
Rated 1 out of 5 by missy0420 from It's been 2 weeks, still nothing I Ordered an xbox on January 3rd and it says it's delivery day will be jan 8th. That was 8 days ago. Still nothing? No idea what's taking so long
Rated 1 out of 5 by Broble from The same boat as others Omg, come on qvc! Your vendor, who is suppose to ship these, well I just don't think they have any xbox consoles and they are taking you, and your customers, for a ride. How come so many people complain but you do nothing to figure it out for us? WHERE ARE OUR ORDERS? for the love of Pete, please get on this issue.
Rated 1 out of 5 by Neonsaylor from Ridiculous QVC! Just like every other customer...Ordered before Xmas & still haven’t got it. So nice to send me a replacement when it’s obvious nobody is receiving them. What he heck is going on QVC? Why do you still have these to order when you can’t even fulfill current orders? I’m done with QVC!
Rated 1 out of 5 by neveragainx3 from don’t waste your time took 6 days for seller to say they “shipped” item, then on the day for estimated arrival after paying for premium delivery, seller marks item as “shipped”. UPS never received item. i read other reviews and chalked it up to holiday madness and low stock, even saw QVC changed item to “waitlist only” so i thought ‘surely they’ve realized they didn’t have any in stock, waited, and now have product available’. WRONG. QVC reps have no idea what’s going on, they only have access to same info i can see apparently. all they can do is refund or replace item, but if y’all are getting so many complaints of never receiving an item, why do you offer to replace? makes no sense. i want a refund but i’ve already bought other games to go with this console. smh. thought QVC had more of a handle on things and could be trusted to have access to the actual sellers and products. should be able to leave ZERO stars