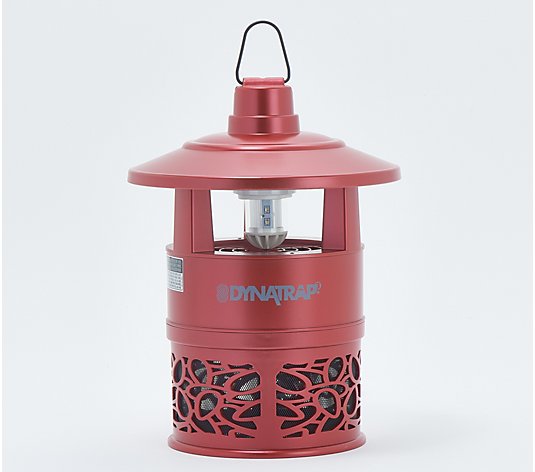 DynaTrap XL Insect Trap For 1/4 Acre w/ Extended Life UV LED Bulbs is rated 2.9 out of 5 by 15.
Rated 1 out of 5 by Debsilves from Mosquitoes laugh at this. Purchased this and does not work for mosquitoes! Moths, fly’s, maybe small Beetles!
Rated 2 out of 5 by 3 Kitties from Sorry I Purchased It Bought one last year and I guess I didn't realize you have to plug it in to an outlet. You also need to keep it so many feet away from where you are sitting. Where outside do you plug it in? I don't know of many people that have outdoor outlets. I have one on my deck, but then it's to close to where we're sitting. I don't want to have to use a long extension cord and put it way out in my yard. Who wants an extension cord out in the middle of your lawn? Plus if it's out in your yard what do you hang it on as it states to keep it 6 feet off the ground. It would be so much better if it were battery operated.
Rated 5 out of 5 by Trinda Anne from Works Well In My Yard I bought this in the spring and put it out in May. I leave it always plugged in and empty it every 3 weeks or so and it fills up with bugs. I had tons of gnats in my backyard and now I have no bugs. Works well if you leave it plugged in and let it do it’s job. I can enjoy my yard without swatting at irritating bugs the entire time.
Rated 1 out of 5 by Hopeful mom from Only thing it caught was moths at night Waste of money ciitronella works better than these,, smh
Rated 4 out of 5 by westlake witch from Keeps Bugs Away! We are happy with our quarter acre Dynatrap. Our basket continues to fill up. Glad we purchased it!
Rated 5 out of 5 by LoveSaltAir from Great Product! I own the half acre size and two 1/4 acre Dynatrap units (I use the 1/4 ac size for my sunroom and inside the house to prevent flies that sneak in) and they work great! I've had to empty my half acre size several times this spring already - It's doing it's job!! We have no bugs around our back door light! You may have to reposition the Dynatrap to find the most efficient spot in your yard, but I highly recommend giving it a try! They are easy to maintain and work well! So glad I bought them!
Rated 5 out of 5 by Bailey mommy from Love The DynaTrap 1/4 Acre Took ours camping a couple of weekends ago, LOVE it. I get bit by everything and not one bite all weekend. Just purchased a second one for the garage to keep the flies and mosquitoes away.
Rated 5 out of 5 by RedJake from 5 STAR PRODUCT We have the half acre and one acre, that we bought last year TSV. We kept the acre and gave the half acre to our son for Christmas. Both of us has had it plugged in for over 1 month. Just checked with our son and he has over an inch of bugs in his with NO mosquito bites on our grandchildren! Ours also has over an inch of bugs in it, also with no mosquito bites here either. Our surrounding neighbors are also enjoying the 1 acre bug free Dyna Trap. That's another way of paying it forward. GREAT PRODUCT!! We only unplugged it to mow the lawn. We both use the mosquito Dyna Trap pads, which we highly recommend. Like the song says: THEY CAN CHECK OUT ANYTIME THEY LIKE BUT THEY CAN NEVER LEAVE! Thanks so much to QVC for offering this on a TSV and Thanks Dyna Trap for making our beloved Summer, Bug Free from the obnoxious ones.