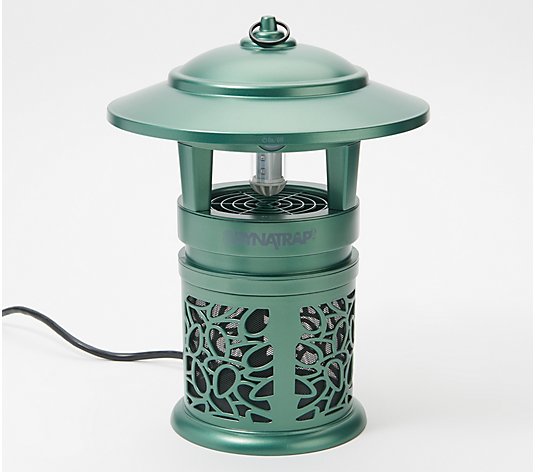 DynaTrap XL Insect Trap For 1/2 Acre w/ Extended Life UV LED Bulb is rated 2.7 out of 5 by 194.
Rated 5 out of 5 by loverene from Good Buy I have 2 older units. Love them. bought a new unit 2 yrs ago to put out by my horses. Love it. Just bought another as I have almost 10 acres. Hope this one does as good as the other 3 I bought. As for only moths. My units have a bunch of different things as for mosquitos. Guess they are in there small to start with so not digging to find out. Give it a try if you don't like donate it to someone you love they will use it
Rated 5 out of 5 by JOANN1976 from Have One For 4 Years We built a large deck and we're eaten alive unless I kept a pit fire going. Bought this half acre the second year and have not had gnats, mosquitos....nothing. Just ordered the 1/4 acre for our new huge garage. They even capture the rotten lantern flies.
Rated 5 out of 5 by Debra77 from Great Insect Trap!! I purchased this Dyna trap in March, it is Full of Insects!! This is great to have to be able to enjoy outdoors!!
Rated 1 out of 5 by Kenny2 from Doesn't work on wasps and hornets I live in the Southeast and have a terrible time with wasps and hornets. I've tried all three versions of these Dyna Traps, and none of them have killed anything but moths. I'm very disappointed. I won't be buying the fourth version when it comes out.
Rated 1 out of 5 by catrescuer from All It Catches Is MOTHS! I fell for the hype. I watched the presentations and it appeared to be a wonderful product. So I bought the Dynatrap several years ago, hoping to be able to sit outdoors and not be eaten alive by the mosquitos as I usually am. I empty it faithfully and not once have I seen a mosquito. It contains only moths. I didn’t need to spend this amount of money on a moth trap. I’m truly disappointed. I’ve finally learned to no longer believe the hosts’ enthusiastic presentations. So often now the quality is just not there; QVC presents so many items that seem to pass with little vetting. The company now over promises and under delivers. I no longer jump to order.
Rated 5 out of 5 by MarySM from You have to try this I dont understand all the negative reviews we bought ours last year and it worked so well. We left it plugged in all year and this year its even better because it was able to capture things as they first came out. We have a very wooded back yard and I am sitting outside in the evening writing this and not a bug or mosquito bugging me. I was recently at my sister in laws and they had mosquitos everywhere thats when I knew how well mine worked because we have none. I even told her to order one and she did right away. This is perfect for your yard, try it you will not be disappointed.
Rated 1 out of 5 by klo33 from Reviews I was looking forward to buying one but the reviews showed me that I should not.
Rated 2 out of 5 by SaraJane from Old Version Better!! So disappointed in this new model, LED bulb…doesn’t catch anything!! I had 2 of old the older ones that were fantastic, unfortunately the both developed problems so I got the new version….WISH I Had Not, should have try to fix the older model. I think this new one was a waste of $$$, I gave in snd got a small zapper type elsewhere.