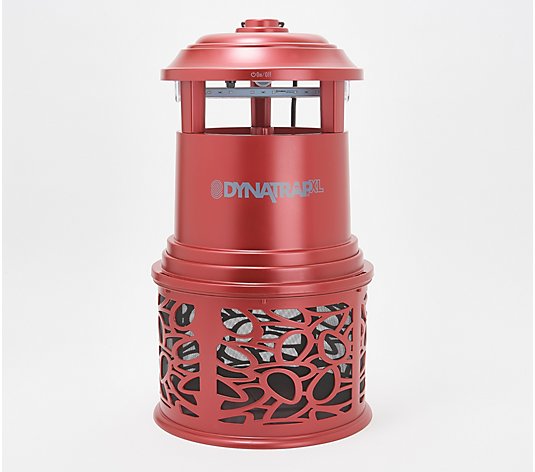 DynaTrap XL Insect Trap For 1 Acre w/ Extended Life UV LED Bulb is rated 3.1 out of 5 by 125.
Rated 5 out of 5 by dtcm from Works for us For years, we couldn't sit or dine on our patio with all the bugs all over us and the food. A few years ago we bought the 1 acre for our back yard, we hung up from a tree off the end of the 32' long patio and we run it 24/7 every day of the year. (We don't have hard long snowy winters). Ever since we got it about 5? years ago, and started using it we don't have the flying bugs. We sit out on the patio for hours at a time, we dine out there without bugs all over our food. We bought the 1/2 acre for the front porch area, too. This year in a bad windstorm the 1/2 acre on the front porch that hangs from the ceiling at the end of the porch, fell and the light broke. We had no extra bulbs for that one so we had to order more. While waiting for that to come, I was working in the yard out front and got 3 bites. I haven't had bug bites since we bought these so I knew it worked. Once we got the new bulbs and put one in we sat out front without any bug bites. Plus one time when we cleaned the big one and opened it up the bugs that weren't yet dead came out and I got bit by a mosquito so I know they work. Our own first hand tests. We're getting another 1 acre to keep on hand in case our old one stops working we don't want to be without it again. We would definitely recommend.
Rated 5 out of 5 by Mahughes123 from Best Purchase Ever Purchased this Dynatrap 1 acre size for my deck in Oregon which also backs up to a 7 acre natural park. Turn on in April through October and for the past 2 years we have not had any mosquitoes! Dynatrap attracts a lot of moths that we didn’t know where in our yard! I have recommended to all my friends and they are all believers too! Great product!
Rated 3 out of 5 by Diane86 from Don't Like New Bulb I have had old version for at least 4 years.. yes, I use the scent pads. I love my 1/2 acre units with the old bulbs. Then I purchased the one acre with the new bulbs, and NOTHING but moths. Glad I bought every old bulb I could find last fall... Yes I played with position, height, number of pads etc. EMPTY again this Spring 2021...would recommend old version
Rated 1 out of 5 by poolsidefun from Dyna Trap This doesn’t work! So disappointed! All it takes care of is moths….no mosquitoes no black flies, waste of money!!!
Rated 1 out of 5 by JVHAWAII from Skip It I bought the largest one and all it catches is moths. I place it right next to our door at the cabin and simply does not do what it says it will do.
Rated 1 out of 5 by Annie616 from Not Impressed I bought the acre, big boy. I have had it on since April all day/night. I live in the country and have caught moths. I am currently sitting 15 yards away with a large fly who keeps landing on me. Not worth it he $150
Rated 1 out of 5 by jomist3 from I’m a sucker I fell for it yet again, the great pitch by the hosts at QVC. I had second thoughts when this was a TSV at the end of Winter. Who could possibly know within the 30 day return period if it will work when it is March the bugs aren’t out yet. I have had this continually running for days and have trapped A moth, ONE. Appearance of item is nice but item is ineffective.
Rated 1 out of 5 by BeaELL from Disappointed Nicely made and not an eye sore. However, two months in and I’ve only caught nats. Wish I would have returned it.