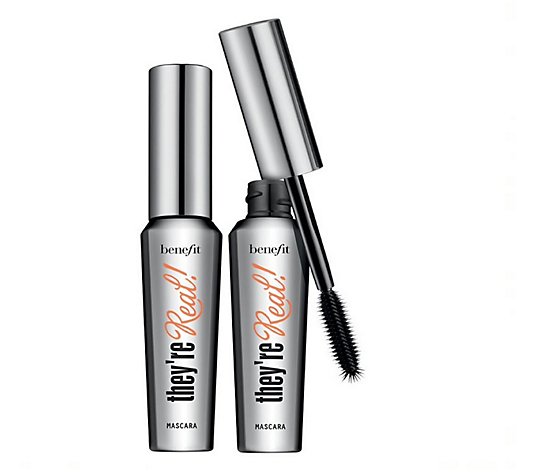 How do I use it: Position wand horizontally and wiggle from side to side, base to tip, to achieve the appearance of volume and long lashes. Hold wand vertically and stroke upward to separate and curl lashes. Layer generously as desired. For the appearance of even more dramatic length, use the domed tip to fan out corner lashes.

Benefit Cosmetics They're Real Mascara BoosterSet is rated 1.5 out of 5 by 2.
Rated 2 out of 5 by Occasional Shopper- Not from I love this product. I have purchased this product in the past. I loved it. Well this time I think this was a return on the one I opened. It was all dried up and didn't work as previously. I will buy from my local beauty counter from now on. I haven't opened the second one yet.as I have other brands I am using. Not sure if used or if just not the quality anymore.
Rated 1 out of 5 by Sueplus5 from Complete incompetence I have waited for this correct item to be delivered to me since August 1, 2020. The first product I received was not the right mascara. So I called and they sent another order out to me and it was again, the wrong mascara. They then said they would do a search with the warehouse to figure out why the wrong item was being pulled and shipped out. So I continued to wait for mascara that I needed when I ordered!! Nobody ever responded to me in any way to let me know if this had been fixed and if I would ever get the right product in this order. I called again this past week of September (it has now been month) and I asked about the replacement order and they said they would ship that out again. I got it today, September 17 and it is again the wrong mascara. If I was any one of you considering the order of this product DON'T! You will never get what you ordered and it's pricey mascara. If I was the company of BENEFIT, I would be questioning why QVC can't deliver their products. The only positive is that the Customer Care people have tried to help but they can't control what the warehouse does. Bad form QVC.