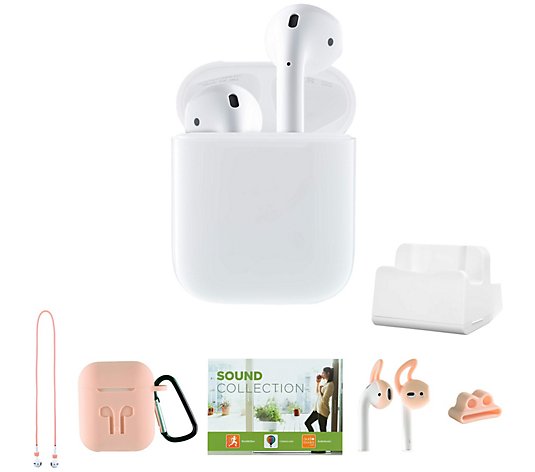 Just ask Siri. She'll tell you that the second-generation Apple® AirPods® wireless headphones are more magical than ever, giving you voice-activated access to your favorite personal assistant. Powered by the new H1 headphone chip, the oh-so-simple set-up connects instantly to your Apple® devices and plays when placed in your ears--and they pause when removed so you don't miss a beat. Just like magic.

This bundle also comes with some useful accessories, including a silicone sleeve, magnetic neck wrap, and more!
Print this Page

Apple AirPods with Charging Case and Accessories Bundle is rated 2.0 out of 5 by 4.
Rated 5 out of 5 by Anonymous from Awesome I ordered them in the blue for my daughter in March after school was closed, since she would be doing so much schooling via online classroom and zoom, etc. She absolutely loves them. I just ordered a 2nd pair in red for my son for his birthday (he was jealous of hers, lol) I have experienced longer than usual shipping/delivery times lately as some have mentioned- I'm guessing due to Covid 19, so I'm pretty sure they won't arrive in time for his birthday next week. Oh well, I'll put a picture in his card and he'll still be thrilled when it does arrive.
Rated 1 out of 5 by Suzzzy from Hate to review on shipping but...... I never like to see reviews on a product about customer service or shipping issues but this seems to be the only way to express my dissatisfaction since you cannot get through to customer service. Have NOT even received yet; shipped on June 3rd, today is the 18th. I have watched the tracking and it actually made it to my hometown, then left again. This package has seen more of the country than me!! I think QVC needs to rethink their shipping methods since I am not the only one with this problem. Shipping was NOT cheap on this item either. I have several other orders that have been in process for 2 weeks. If I ever receive my orders I believe it will be my last orders with Q. Sad because I have been with them from the start. I don't think they can blame COVID for these issues now.
Rated 1 out of 5 by He5makba from Unacceptable delivery delays Product still hasn't actually shipped. Order placed 6/5/20. QVC declared the item "shipped" on 6/9/20. Item is still "pending" for transfer to USPS on 6/17/20 as I write this. Delivery date was supposed to be 6/15/20. I can't even cancel the order because QVC won't let you do that once the item is declared "shipped". I've learned my lesson though. Ordering from Amazon from now on.
Rated 1 out of 5 by Charlene11 from Don’t know because I haven’t received the product Delivery date given was 6/13 but I still haven’t received the product by the end of day 6/14 (9pm). Very disappointed because I was very excited to use them.

We think these will make you merry.