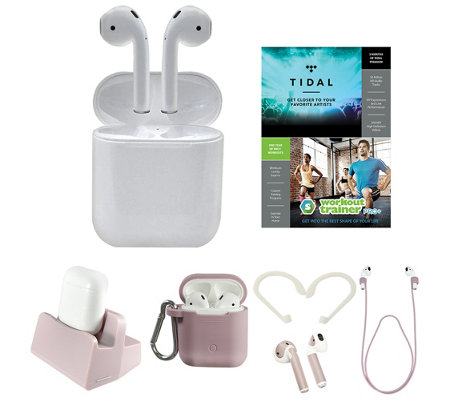 Just ask Siri. She'll tell you that the second-generation Apple® AirPods® wireless headphones are more magical than ever, giving you voice-activated access to your favorite assistant. Powered by the new H1 headphone chip, the oh-so-simple setup connects instantly to your Apple devices and plays when placed in your ears--and they pause when removed so you don't miss a beat. Just like magic.

This bundle also comes with useful accessories, including a charging stand, ear hooks, silicone sleeve with carabiner, and skins so that you can colorfully customize your wireless headphones.
Print this Page

Apple AirPods 2nd Generation with Charging Case & Accessories is rated 3.2 out of 5 by 5.
Rated 1 out of 5 by Urbangrrl from Not a good value at all! Imagine my surprise this week when I walked into my local big box store (name begins with Cos) and found the 2nd Generation AirPods priced at $150 including tax. My total cost for one pair of 2nd Gen AirPods ordered from QVC was $243.92 including tax and shipping. I purchased four sets from QVC intending to give them as Xmas gifts. All 4 sets will be returned as they are not a good value for my money!
Rated 5 out of 5 by Anonymous from Great Got to use them for 1 hour then they were stolen from me!! So here’s hoping my next pair will last
Rated 4 out of 5 by Ayania from In Process So far no complaints. My mom has been a QVC customer for years. This is my first time using them but they shipped my air pods to the wrong address and I was sure it was going to be an issue but the rep I spoke to quickly replaced my order and has them being shipped to the right address. She was quick sweet and understanding of my kids in the background going crazy, I’ll update again once I receive my AirPods but so far so good and I’ll be shopping with QVC in the near future
Rated 1 out of 5 by handbaghannah from Overpriced I have been a QVC customer for many years and have always felt their “special” offers not only were of high quality but also at a much better price than could be found in the general marketplace. Not so with this product. After receiving this I found the “extras” to be cheap Chinese made dodads that could be found at the well known electronics store for between $19-$25 for these extras. With shipping and tax I was charged over $271 for apple earbuds 2nd generation that could be purchased on several different sites for $179 with free shipping. So I paid almost $100 for what? This purchase is on its way back and no longer will I assume I’m getting the best deal available from QVC.
Rated 5 out of 5 by Nyhi from Found it! A few days ago I got this item. I only want to be able to listen to my music on it so that is where I am coming from. I probably will not try anything else out on the AirPods for awhile so take that into consideration when reading this. The AirPods work great for listening to music. I am not a fussy listener so be aware of that too. It was easy to “attach” to my iPhone and iPad. When I got it I could not find the charging cable so I called QVC and asked for another. Much to my embarrassment I found the cable under the container that came with the Air Pods this morning. So, be warned! It is all there, just hiding under the tabs.